Sino-Inst offers a variety of Float level sensors for industrial level measurement. If you have any questions, please contact our sales engineers.

What is float level sensor?

Float level sensor uses magnetic float as the measuring element. Through magnetic coupling, the internal resistance of the sensor changes linearly. The smart converter converts the resistance change into a 4-20mA standard current signal. It can display the percentage of liquid level, the current of 4 ~ 20mA and the value of liquid level. Remote transmission control room can realize automatic detection, control and recording of liquid level. This instrument is suitable for petroleum, chemical, power, light industry and pharmaceutical industries, such as sewage treatment and medium level measurement in various atmospheric and pressure vessels, especially for underground tanks and tanks.

Float level meter is an instrument for measuring liquid level. It is widely used in the field of liquid measurement. Many industries will choose to use it for measurement equipment. Such as the petroleum, chemical, and pharmaceutical industries.

Float level sensor: Float level sensor is designed and produced based on the principle of buoyancy and static magnetic field. The position of a floating ball with a magnet (floating ball for short) in the measured medium is affected by buoyancy. The change of the liquid level causes the position of the magnetic float to change. The role of the magnet and sensor (reed switch) in the floating ball changes the number of components (such as fixed resistance) connected in series to the circuit. Thereby changing the electrical quantity of the instrument circuit system. That is, changes in the position of the magnetic float cause changes in the electrical quantity. The change of the electrical quantity is detected to reflect the liquid level in the container.

What is a liquid level switch?

The float level switch uses magnetic force to operate. There is no mechanical connection. The operation is simple and reliable.

The magnetic float of the float level switch is used to rise or fall with the liquid level, so that the reed switch chip at the set position in the sensor detection tube is activated, and the contact open (close) conversion signal is issued.

One or more Reed tubes are installed in the sealed non-magnetic tube. Then the tube is passed through one or more hollow floating balls with ring magnets inside. The rise or fall of the liquid will move the floating balls up and down together. Thereby, the reed switch in the non-magnetic conductive tube is attracted or disconnected, thereby outputting a switching signal.

More about Float switch From Wikipedia.

The Cable Float Level Switch is with simple structure of using micro switch or proximity switch or reed switch to control the contact. And it is user friendly design for level measurement. The switches will send out ON or OFF contact signal output. The floating angle is larger than a certain degree. Then the state of the iron ball and reed switch will be changed for actuation. For wastewater and applications at different temperatures, the material of the float can be selected from plastic to stainless steel. Cable float level switch controls long distance and multi-point contact detection. Cable float level switch can be used for transparent liquid and granular liquid industries.

The Multi-Point Liquid Level Float Switch operates magnetically, without mechanical connections. And it is simple and reliable. When the floating ball switch measures the floating medium of the test medium, the float moves the main body. And at the same time, the magnet on the other end of the float will control the magnet on the switch operating lever.Set one or more reed switches in a closed metal or plastic tube. And then pass the tube through one or more, hollow and floating ring with ring magnet inside. And use the fixed ring to control the floating ball and the magnetic spring. The switch is in the relevant position, which makes the float float up and down within a certain range. The magnet in the float is used to attract the contacts of the reed switch, which generates the opening and closing action.

What is float level switch?

What is ultrasonic level sensor?

What are the different types of level sensors?

Sino-Inst offers over 10 Float Level Sensors – Single and Multipoints for level measurement. About 50% of these are float liquid level meters, 40% is the level switches.

A wide variety of Float Level Sensors – Single and Multipoints options are available to you, such as free samples, paid samples.

Sino-Inst is a globally recognized supplier and manufacturer of Float Level Sensors – Single and Multipoint instrumentation, located in China. 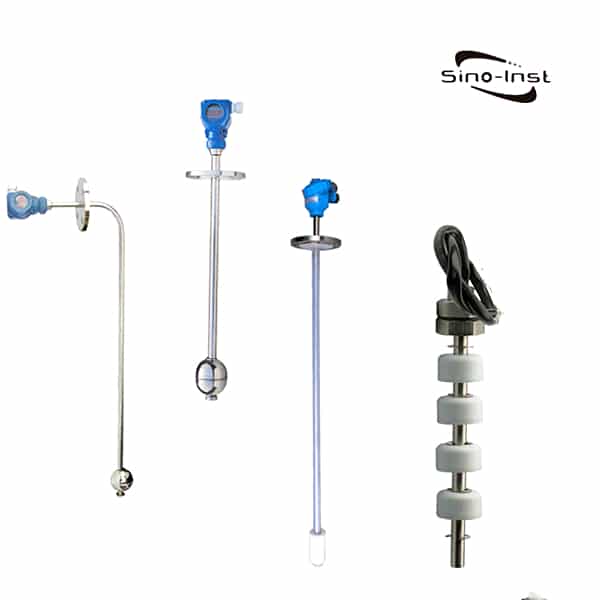